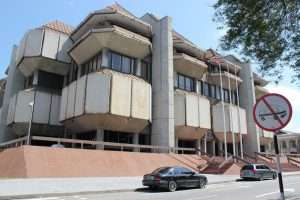 trinidadexpress.com – KERRY ANN Hosang, the woman who admitted to arranging the murder of her friend and stealing her newborn baby, will be sentenced on September 18.

Hosang was expected to have been sentenced yesterday.

However, when the matter was called before Justice Althea Alexis-Windsor at the Port of Spain High Court, no prosecutors (attorneys from the office of the Director of Public Prosecution) were present.

Keith Scotland, the attorney representing Hosang, explained to the court the State had also missed its deadline to file submissions for an appropriate sentencing.

After further submissions, a new deadline was set and the case was adjourned.

Two months ago, Hosang pleaded guilty to the charges in the High Court, almost 14 years after the plan was orchestrated.

But even though the guilty plea was entered, Justice Alexis-Windsor did not immediately move to impose sentence since her attorneys, Scotland and Asha Watkins-Montserin, had requested that a bio-social report from the Prison Service be prepared for the court’s consideration before sentence was passed.

Under the felony murder rule, the judge has discretion to waive the mandatory death sentence and instead impose a term of imprisonment.

Hosang was charged with the murder of Reena Kissoon which occurred on the morning of September 3, 2005 at Kissoon’s La Horquetta home.

But in Hosang’s statement to police, which would have been presented to the jury had the matter proceeded to trial, she claimed she never wanted Kissoon dead.

Instead, Hosang said she had hired two men and paid them $2,300 to “slap around, threaten and even tie Reena” and then take her baby in exchange for a $5,000 loan Reena had refused to repay her.

Kissoon’s body was found with chop wounds, with one injury to the neck that severed her trachea.

Police were taken to the location by Kissoon’s friend who had reported her and her newborn daughter missing after not hearing from them for several days.