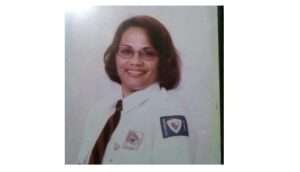 [ABC News] – A Queens woman who needed a wheelchair after suffering a massive stroke died in a fast-moving fire in her home late Tuesday.

Firefighters were called to the building on 219th Street in Queens Village as the flames quickly spread, and cell phone video showed the intense flames shortly after 11 p.m.

Authorities say 63-year-old Azmin Jaomin, a former security guard who recently suffered a stroke and lived in the home with the help of a home health aid, was found dead after the fire was extinguished.

“She had a massive stroke, too, so her left side, her foot and hand not working properly,” her niece said. “Very nice woman, my aunt was a beautiful woman, beautiful. I’m so shocked to see that this happened to her.”

Jaomin was trapped inside the home on the first floor and unable to get out.

The home does have other tenants, but it’s unclear if they escaped or were not home at the time. No other injuries were reported. The cause of the fire remains under investigation.