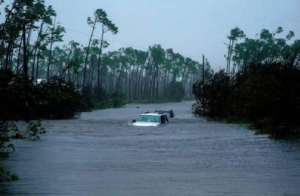 (CMC) — The 15-member Caribbean Community (Caricom) grouping yesterday said the devastation being experienced in The Bahamas as a result of Hurricane Dorian is reminiscent of the situation that existed two years ago when several regional countries were bashed by hurricanes Maria and Irma.

Caricom chairman and St Lucia Prime Minister Allen Chastanet, in a message, said that the region stands in solidarity with the Bahamas, where five people have already been confirmed dead as a result of the weakening Hurricane Dorian, which is slowing moving away from the archipelago.

Bahamas National Security Minister Marvin Dames said the death toll will increase after indicating that a few children would be among those killed by the storm.

“I caution Bahamians everywhere that chances that we find more persons dead, those chances are real,” Dames told reporters, adding, “it’s certainly a concern for us. This was a crisis of epic proportions. We want to be responsible; we want to be caring.

“As we report these things we’re taking into account the sensitivity around this…The reality of it all is, unfortunately, we will see more deaths. I can’t see any way out of it.

“Unfortunately, what we’re getting is [that] a few of them are children. We’re at the beginning of this. This is a very unfortunate occurrence for us, maybe the worst that we’ve experienced, certainly in our lifetime,” Dames said.

Chastanet, in his message, said: “Today, the hearts of the people of the Caribbean are heavy,” adding that The Bahamas has been “devastated by a dangerous hurricane as our region continues to experience the effects of climate change”.

He said he is “saddened by the early reports coming out of The Bahamas, which are reminiscent of the severe devastation experienced by a number of Caricom states just two years ago when hurricanes Irma and Maria hit us.

“On behalf of the Community, I extend deepest condolences to all who have lost loved ones to this devastating storm. The Caribbean Community expresses its full solidarity with the Government and people of The Bahamas at this time, and stands ready to give whatever assistance is required to deal with the effects of this tragedy.”

Chastanet recalled that at the last Caricom summit held in St Lucia in July, regional leaders considered options for financing member states’ actions to build resilience to the effects of climate change, including the establishment of a Resilience Foundation.

“It is my fervent hope that this matter will be given new impetus in the coming months. Immediately, the emphasis must be on assisting our brothers and sisters in The Bahamas in getting back on their feet in the quickest possible time.”

He said these teams will assist The Bahamas Government to assess the situation and facilitate the provision of immediate relief in the aftermath of the hurricane.

“As soon as we have a needs list prepared we will share this information with the public and the wider Caribbean family. I urge all our citizens, here in the region and throughout the Diaspora, to lend support to the recovery effort.

“I also appeal to the international community, governments and institutions to come forward and partner with us in helping The Bahamas through the difficult days and months ahead. I call on all the people of the Caribbean to continue to keep The Bahamas and all countries affected by, or currently in the path of Hurricane Dorian in our thoughts and prayers,” Chastanet said.

There have been reports that at least 21 people have been airlifted to New Providence as the rescue efforts continue.

Residents of Abacos and Grand Bahama have been relating their experiences, with some saying that they had no words to describe the damage caused by the hurricane that hit the country as a category five storm with winds in excess of 180 mph.

People have been posting photos of their friends and relatives in the Abacos who had not been heard from since before the storm, and Prime Minister Dr Hubert Minnis on Monday urged people not to post videos to social media that would further worsen the situation.

He said the fake news and fake messages could be very damaging, both to individuals and to the nation.

“Many people in affected areas, their loved ones in The Bahamas and overseas are understandably worried. Please do not add to their anxiety and their worries. This is not the time to be creating mischief and playing on the emotions of others, especially those who are most vulnerable at this time,” he urged.