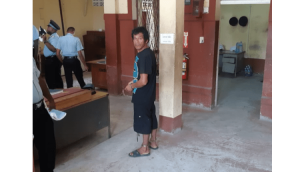 newsroom.gy- After being on the run for the past 21-years for killing his wife, 46-year-old Philbert Thomas was on Monday arraigned for the capital offence of murder before Senior Magistrate Leron Daly at the Georgetown Magistrates’ Court.

Thomas was not required to plead to the charge which read that on September 5, 1998 at Cabacalli, Santa Rosa, North West District, he murdered his wife Viola Thomas.

He was remanded to prison until September 9, 2019 when the matter will be transferred to the Chief Magistrate Ann McLennan.

According to police Headquarters, on the day in question the woman was stabbed several times about her body while she was at a Fun Day.

Thomas went into hiding and was never brought to justice for the horrific murder.

But on August 26, 2019, Thomas was finally taken into custody after the woman’s mother recognized him in the media following reports that he was remanded on August 21 for two counts of inflicting grievous bodily harm to his ex-girlfriend and her new partner.

Police Headquarters revealed that the charge was reported in local newspapers with the man’s photograph under the name Gilbert Thomas. However, Viola’s mother, Alina Thomas recognized him as the man wanted for her daughter’s murder and made a report to the Aquero Police Station.

According to the Police, Thomas was positively identified by Alina Thomas and subsequently confessed to the murder of Viola.

Thomas was initially charged with the murder in absentia and the case was heard at the Aquero Magistrate’s Court in Region One where several witnesses testified against him.

Eight years later, the matter was recalled at the same court and was adjourned with no appointed date for resumption.