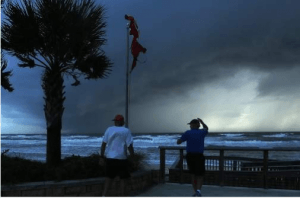 (AFP) — Hurricane Dorian crept towards the southeast coast of the United States on Tuesday, weakening slightly but remaining a dangerous storm after leaving a trail of death and destruction in the Bahamas.

At least five deaths have been reported in the Bahamas from a storm which Prime Minister Hubert Minnis called a “historic tragedy” for the Atlantic archipelago.

The Miami-based National Hurricane Centre (NHC) said Dorian, which has dumped as much as 30 inches (76 centimetres) of rain on the Bahamas, had been downgraded from a Category 3 to a Category 2 storm on the five-level wind scale.

Dorian was located about 105 miles east of Fort Pierce, Florida, and moving in a northwesterly direction towards the Florida coast at a snail’s pace of two mph, it said.

The hazardous conditions would continue through much of Tuesday on Grand Bahama Island, which is the northernmost island in the archipelago and home to its largest city, Freeport, the NHC said.

It said Dorian was expected to pick up speed and grow in size during the day and turn towards the north on Wednesday evening.