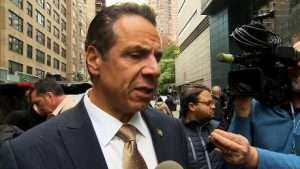 (CNN)- Over 150,000 people will have previous marijuana convictions sealed thanks to a New York law that went into effect on Wednesday.

The new bill, signed into law by Democratic Gov. Andrew Cuomo in July, removes criminal penalties for possession of less than two ounces of marijuana. It reduces the penalty for the possession of less than 1 ounce of marijuana to a $50 fine, regardless of criminal history, and a maximum of a $200 fine for the possession of between 1 and 2 ounces.
Cuomo said the bill is a “start of a new chapter in the criminal justice system” and is long overdue.
“By providing individuals a path to have their records expunged, including those who have been unjustly impacted based on their race or ethnicity, and reducing the penalty for unlawful possession of marijuana to a fine, we are giving many New Yorkers the opportunity to live better and more productive, successful and healthier lives,” he said in a statement.
More than 202,000 convictions in the state from the late 1970s through mid-June of this year will be sealed and 24,409 people will no longer have a criminal record, New York State Division of Criminal Justice Services spokeswoman Janine Kava told CNN.
Under the new law, convictions are automatically sealed in the system, but in order for the individuals to have the actual records destroyed, they must petition the court where the conviction occurred.
“As of today we, along with New York State’s Division of Criminal Justice Services, have suppressed any indication of past cases in a criminal records history search,” Lucian Chalfen, a spokesperson for the New York State Unified Court System, told CNN. “On previously disposed Marijuana cases our system currently seals them post-conviction and will continue to function the way it is currently working.”
Democratic presidential candidate and New York City Mayor Bill de Blasio has pushed for decriminalization of marijuana and called for legalization of recreational use. In 2018, de Blasio called for the New York Police Department to stop arresting people caught in public smoking marijuana in an effort to curb the number of minorities arrested for marijuana possession. The New York General Assembly failed to legalize recreational marijuana use in June.