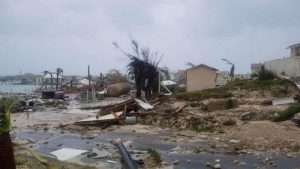 nbcnews.com- Hurricane Dorian hovered at a near-standstill Monday evening as it battered the northern Bahamas with ferocious winds and heavy surf, leaving at least five dead in the archipelago as officials warned the body count could rise.

The deaths occurred in the Abaco Islands, which has felt the brunt of the punishing conditions that have continued to shred homes and flood low-lying islands, Bahamian Prime Minister Hubert Minnis said at a news conference.

Dorian, one of the strongest Atlantic storms ever recorded, weakened slightly to a Category 4 storm earlier Monday with 145 mph winds but remained “extremely dangerous” in the Bahamas for a second day, the U.S. National Hurricane Center in Miami said. Officials in the Bahamas feared more destruction as the storm’s outer bands began to brush South Florida with thunderstorms and high surf.