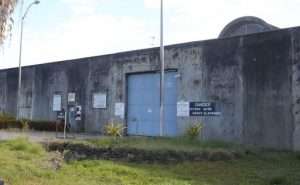 guardian.co.tt- Six men linked to a high-profile inmate have been arrested and their alleged suspected murder plot foiled.

They are currently being held at various police stations across the Northern Division up to press time on Thursday.

According to initial information reaching the Guardian Media they were reportedly waiting to kill an inmate who was being released outside the Maximum Security Prison.

The incident occurred at about 3 pm when police and prison officers received intelligence that the men were in three cars outside the prison grounds.

The officers moved in on them and arrested them. The vehicles were also impounded.

All National Security law enforcement and intelligence agencies are said to be on high alert and are working cohesively to support the safety of prison officers.

Earlier this month, National Security Minister Stuart Young, in a release, strongly denounced the recent circulation of threatening messages being made against prison officers.

On August 13, Commissioner of Prisons, Gerard Wilson advised all officers of the T&T Prison Service to exercise extreme caution and vigilance especially when off-duty.

The advisory came after several threats began circulating via the WhatsApp medium, indicating a plot to ‘kill any two officers’.

The advisory also came hours after the ex-wife of a prison officer, Sherry Ann Watson, 51, was killed seconds after she arrived at her home in Malabar on August 12.

According to Wilson, all security agencies are on high alert and directives are in place, especially for officers who live in what are deemed ‘high risk’ areas.

Shortly before 6 pm Watson was about to enter her house at Albert Mark Street, Phase 4 when two gunmen ambushed her and opened fire. She died on the scene.

On May 8, in a similar incident, 13 people from a well-known gang in the Northern Division were found lurking around the Tunapuna Magistrates’ Court. They were arrested in connection with a plot to murder a state witness as he exited the court.

The state witness, 38, had given evidence in an attempted murder case that same day.

The suspects who were arrested were between the ages of 20 to 35.

The four vehicles used by the suspects – a Tiida, an AD wagon, an Elantra and H100, which were said to parked in the vicinity of the court have also been seized and sent for forensic analysis.