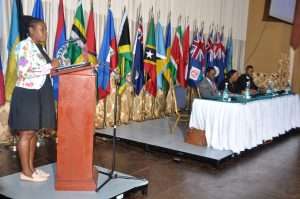 The Media Workers’ Association of Grenada (MWAG) expresses its disapproval of a statement read by Press Secretary to the Prime Minister, Ms. Philomena Robertson at the Government’s weekly Post Cabinet briefing on Tuesday August 20th 2019.

In her statement, the Press Secretary stated: “This is professional setting. The facilitators are usually Ministers of Government or Senior officials and they are professionals, likewise members of the media who are present are professionals; and as such we should conduct ourselves in a manner befitting of professionals. In other words, there should be professionalism in the workplace and all persons here in the press briefing are in the workplace in one capacity or another. One of the key elements of professionalism is demonstrating respect; respect for one’s self, respect for colleagues, respect for persons in authority, respect for the workplace environment, whether it is your actual office or another location where you execute your duties as a professional. Specifically, as it relates to these press briefings, we must also demonstrate respect for the audience: the viewing and listening public. There have been instances in recent times when it appeared that the professional nature of this weekly press briefing is challenged and where disrespect is evident. We are all servants of the people and in executing our respective duties we should remember this and put personal issues aside. This is simply not the time nor the place. From henceforth, I would expect that we would all conduct ourselves in a professional, respectful and courteous manner at all times during our weekly post cabinet press briefings”.

MWAG views this statement as an attack on press freedom and the reputation of Media Workers in Grenada.

There has never been any instance in the history of Government’s Press Briefing where the professionalism and integrity of media workers have been questioned. Therefore, this statement came as a surprise to the media fraternity.

On Tuesday August 27th 2019, MWAG’s Acting President, Delroy Louison contacted Ms. Robertson via telephone to schedule a meeting, seeking clarity on the above mentioned statement. She then asked him to make a formal request in writing to her office for consideration. On the said day, a letter was written, emailed, printed and delivered to the Press Secretary and copied to the Information Minister, Senator the Hon. Dr. Winston Garraway.

To date, there has been no correspondence from the Press Secretary herself nor the Information Minister.

This demonstrates a lack of professionalism and respect for the Fourth Estate.

The Media Workers’ Association of Grenada is therefore requesting a withdrawal of the statement and an apology to members of the fraternity, via the same medium.

If this request is not acceded to at the hosting of the next Press Briefing, the Association will seek alternative measures to deal with this matter.

UNESCO Director General, Audrey Azoulay on the occasion of World Press Freedom Day 2019 stated: “Press freedom is the cornerstone of democratic societies. All States, all nations, are strengthened by information, debate and the exchange of opinions. At a time of growing discourse of mistrust and delegitimisation of the press and journalism, it is essential that we guarantee freedom of opinion through the free exchange of ideas and information based on factual truths”.

MWAG holds dear its mandate of advocating the rights of Media Workers of the State of Grenada.