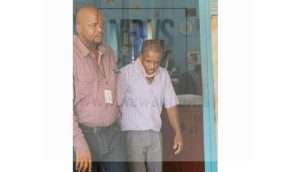 newsroom.gy- A 54- year-old gold miner on Friday appeared before Magistrate Marissa Mittelholzer at the Mahaica Magistrate’s Court charged with the murder of his wife, Vinnette Headley-James which occurred at their Lot 68 Nabaclis Side Line Dam, East Coast Demerara house.

Sherlock James was released from the Georgetown Public Hospital on Thursday after he tried to slit his throat; he had difficulty in addressing the court and had to be aided by a Police Officer.

He was not required to plead to the capital offence which alleged that on August 21, 2019, he murdered the 44-year-old mother of eight.

James was unrepresented and was remanded to prison until October 9, 2019. The matter is transferred to Magistrate Fabayo Azore at the Cove and John Magistrate’s Court.

The News Room had reported that the miner was away from home working in the interior and upon his return, he and his wife got into a heated argument about an extramarital affair.

It is reported that Vinnette wanted to end the relationship and was in the process of packing her husband’s belongings to put it out of the house when he attacked her.

Police reported that the couple had a prior argument on August 18 when the miner assaulted Vinnette and he escaped.

It is alleged that on the day in question, James went home and threatened to kill Vinnette because she asked him to leave the house.

According to the Police, the man went into the kitchen, picked up a knife and stabbed the woman to the neck.

One of her daughters placed her in a taxi but Vinnette died while receiving treatment at the CC Nicholson Hospital.

The News Room understands that after killing his wife, the man escaped into the backdam and attempted to kill himself. He was found by the Police with a wound to the neck.