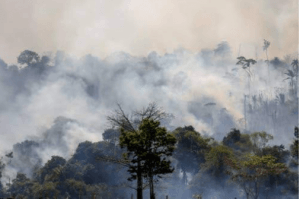 RIO DE JANEIRO, Brazil (AP) — Brazil on Thursday banned most legal fires for land-clearing for 60 days in an attempt to stop the burning that has devastated parts of the Amazon region.

The decree prohibiting the fires was signed by President Jair Bolsonaro and followed international criticism of his handling of the environmental crisis.

The period of the new ban coincides with the dry season, when most fires are usually set. The decree allows fires in some cases, including those deemed healthy for plant life and if set by indigenous people who engage in subsistence farming.

“I think this should have happened a long time ago,” said Waldeglace Sousa Mota, a worker at the airport in the Amazon city of Porto Velho.

“I think it will bring relief during this time,” she said of the ban.

More people, particularly children and the elderly, have been suffering respiratory problems in Porto Velho, where smoke from the fires has often shrouded the sky in past weeks.

The 60-day ban will help curb the burning but its effect could be “very limited” if people ignore it as the peak burning season starts, said Xiangming Xiao, a plant ecologist at the University of Oklahoma who studies deforestation in the Amazon. Most fires in Brazil are set in late August, September and early October, he said.

“Both legal and illegal fire events occurred in Brazil. It will be very challenging to identify and separate them,” he said in an email to The Associated Press.

There are also questions about how effectively Brazil can enforce the 60-day ban. A letter released this week and signed by more than 500 workers from the Brazilian environmental agency IBAMA said a lack of government support had hurt their work and led to an increase in environmental crimes in the Amazon and elsewhere.

Brazil’s forest code normally allows farmers and others to set some fires as long as they have licenses from environmental authorities.

This year, however, there was a sharp increase in nationwide fires over the same period in 2018, raising concerns that people were emboldened to burn more after Bolsonaro said rainforest protections were blocking economic development.

Bolsonaro suggested —without citing evidence — that environmental groups were setting illegal fires to try to destabilize his government and sparred with French President Emmanuel Macron and other European leaders who questioned his commitment to protecting the Amazon ecosystem.

The acrimony sidelined a pledge of US$20 million from the Group of Seven nations to help protect rainforest in the Amazon. Much of the burned land had already been deforested, but the location of many fires next to intact forest reflected the increased threat of deforestation.

The Amazon rainforest is vital for the planet’s health in part because it drains heat-trapping carbon dioxide from the atmosphere.

Also Thursday, Bolivia said it will ask for more international help to contain similar fires that were set to clear land and, in many cases, got out of control in strong winds.

“We’re talking to Russia, China and France about aid,” said Foreign Minister Diego Pary, who did not provide details. Fires have occurred in Bolivia’s part of the Amazon and in the province of Santa Cruz, the country’s agro-industrial centre.

A US-based aircraft, the B747-400 SuperTanker, has been flying over devastated areas in Bolivia to help put out the blazes and protect forests. Peru sent two helicopters and Argentina announced the deployment of a 140-member team to fight Bolivian fires.