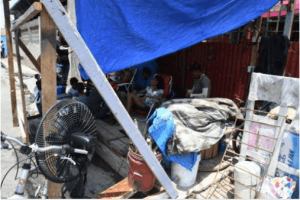 jamaicaobserver.com- THIRTEEN children are among the 24 people left homeless after fire destroyed their homes on Fleet and Tower streets in the Parade Gardens area of downtown Kingston Tuesday night.

Fifty-six mentally ill and physically challenged men were also displaced as a result of the blaze that started at 13 Fleet Street and spread to Good Shepherd Home at 59-61 Tower Street, where they were being housed.

One of the occupants of Good Shepherd Home, who sustained injuries as a result of the blaze, was rushed to Kingston Public Hospital where he was admitted, while the others were relocated to Faith Centre at 7 Law Street.

Ebanks, while noting that they are still speaking to the victims to determine the value of their premises and items destroyed, estimated the damage at Good Shepherd Home to be about $30 million.

When the Jamaica Observer visited the tough inner-city community, more popularly known as Southside in the Kingston Central constituency, yesterday morning, young girls, their mothers and other relatives who lived at one of the fire-ravaged premises on Tower Street, sought refuge under a tarpaulin as the police questioned them and other fire victims.

Geneva Berwick, who appeared from under the tarpaulin, was one of the mothers who said that all the items she got in preparation for the new school year went up in flames.

The mother of four said she came out of her home minutes before the blaze destroyed the house Tuesday night.

“I heard somebody up the road saying, ‘Fire’, and mi go in back, take out the baby, and come and leave everything in deh ’cause di fire did done a come over from 13 Fleet Street and a come over our part. We save two likkle clothes, everything else bun up — book, school shoes, uniform — everything bun up,” Berwick explained.

“A just two piece of clothes mi get fi to save,” Calelia Larmond shared.

Larmond, 20, said she had already made preparations for back-to-school and was anticipating starting a food preparation course at Heart Trust NTA next week.