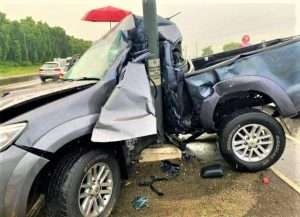 trinidadexpress.com- A woman died on the Churchill Roosevelt Highway on Tuesday afternoon after her Toyota Hilux spun out of control on the rain swept road, and crashed into a light pole on the median.

The force of the impact crushed the cab of the vehicle, and Janine Carr-Weekes was trapped in the vehicle.

She was removed by responding fire fighters, but died soon after.

The crash happened in the vicinity of Trincity/Piarco and led to a major traffic jam along both the east and west bound lanes.