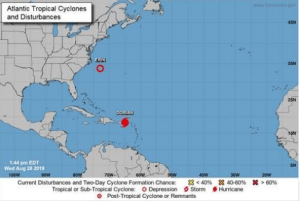 AFP- Tropical storm Dorian was upgraded Wednesday to a hurricane as it barreled toward Puerto Rico, meteorologists said.

The National Hurricane Center said storm the was moving near St Thomas in the US Virgin Islands when its status changed and was expected to make landfall in populous eastern Puerto Rico later Wednesday.

The latest path also puts Dorian on a trajectory to strike the Atlantic coast of Florida or Georgia by the weekend, with few obstacles to weaken it after Puerto Rico.

It is forecast to dump four to six inches of rain on Puerto Rico and the Virgin Islands.

Forecasters project that after it crosses Puerto Rico, the storm will move into the Atlantic.

It is expected to follow a trajectory north of the Dominican Republic, the Bahamas and Turks and Caicos before swinging west toward Florida sometime over the weekend.