Trinidad: Granny, 85, Beaten To Death By Teen High On Drugs 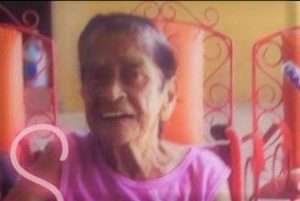 trinidadexpress.com- WITH a piece of metal, Charlieville pensioner Polly Bahadoor was beaten on the head until she fell off her wheelchair on Sunday.

The 85 year old woman died on the floor of her home at Pierre Road before help could arrive.

Neighbours heard the elderly woman’s screams and contacted relatives who found her body.

Police responded around 6.45 p.m. and detained a 19 year old close relative of Bahadoor who lived with her.

Police said the teenager’s clothes were covered in blood.

Detectives said he was hiding in the house, and appeared to be drug-induced when he was detained.

A bloody metal object found near the body was seized by investigators.

Bahadoor and the teenager resided at the house, and close relatives live nearby, police said.

Responding to the scene were Supt Mystar, Insp Singh, PC Lezama and others of the Chaguanas CID, and PC Lutchman and others of Homicide Region III.

An autopsy was expected to be done at the Forensic Sciences Centre on Monday.

Bahadoor was one of four people killed between Sunday and Monday morning.