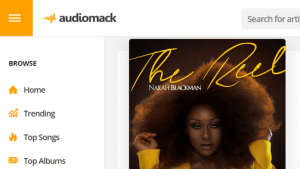 loopnews.com -An American music streaming service is expanding to the Caribbean and is urging soca artists to upload their music to their platform.

Audiomack, a streaming marketing company based in New York, is encouraging soca artistes to upload their music so soca could have its own category on the platform.

Currently, soca is uploaded under the Reggae category because there is not enough soca music to warrant a separate category.

Tanya Lawson, Director of Afrobeats and Reggae at Audiomack, was in T&T recently. She told Loop the purpose of her visit was to meet with media to sensitise the market about who they are.

She said most of the soca being uploaded to the site is by fans and not artistes. So far, Nailah Blackman is one of a handful of artistes who have uploaded her music to the platform. Blackman’s new EP The Reel is available on Audiomack along with some of her older singles such as ‘Iron Love’ and ‘Workout’

She said, however, while many artistes are not aware of the service, the young people are.

“They stream heavy,” she said of the 13-year-old to 22-year-old demographic that uses Audiomack.

She said a lot of artistes in the region still use YouTube to market their music but they don’t get paid through that.

Audiomack was launched in 2012 by Dave Macli and David Pontea and originally focused on the mixtape community.

According to an article in Variety.com, Audiomack says it was the first platform to feature music from now-popular hip-hop artists that include A Boogie wit da Hoodie, Migos, Fetty Wap, Kevin Gates, and Chance The Rapper.

“The service has grown to encompass multiple genres, including hip-hop/rap, R&B, Latin, electronic, Afrobeats, dancehall/reggae, and more. It says it has achieved 210 percent year-over-year growth in daily active users over the last 12 months,” the article said.

Lawson said the artistes who became big while using Audiomack early in their careers, continue to use the service aggressively.

“Music is universal for us, our whole thing is about moving music forward,” said Lawson. ‘Even though we are big on Hip Hop, we are not only focused on that genre. In the States it is a multi-pot so everyone listens so Soca, Punjabi, Zouk, Kompa, is everything so what makes us so unique is that we focus on everything,” she said.

Lawson said using the Audiomack platform is financially beneficial to artistes and producers.

“We monetise the producers and the artistes, that’s one and two, is because we actually trend our music. With a lot of the streaming platforms, you have to promote your music. We do it on our end and we make sure you do it on your end,” she said.

The platform is already in Jamaica and is focused on establishing a presence with artistes in T&T and Barbados.

She said there is a hunger in the US market for new music which makes it fertile ground for soca.