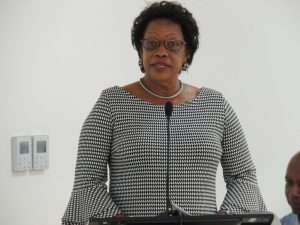 Grenada’s Cocoa industry continues to thrive despite fluctuating prices on the global market. While this over the years has contributed to the cash flow issues that Grenada Cocoa Association (GCA) has been facing, the Ministry of Agriculture continues to support the organization. This was outlined at the GCA’s Annual General Meeting (AGM) at the National Athletics Stadium’s VIP Lounge on Thursday 22nd August.

While Countries such as Grenada are grappling with the Effects of Climate change the Minister of Agriculture and Lands, who delivered remarks at the AGM urged farmers to explore innovative techniques that can be utilized in the production of cocoa.

“A 20% reduction in dry Cocoa, as compared to last year must be of concern to the GCA. While I believe that such reduction has been linked to the negative impacts by adverse weather conditions Farmers are encouraged to adapt climate smart approaches, in the face of climate change. Some of the Climate smart approaches include organic mixed cocoa planting material, construction of deep drain, construction of windbreaks, Rain water harvesting.”

Government back in 2018 allocated EC$1.5 million to GCA for purchase of cocoa from farmers.

In the words of Nadia Comăneci a Romanian retired gymnast, she urged the farmers and members of the association to find practical solutions to combat the challenges faced.

“As Nadia Comăneci once said I don’t run away from a challenge because I am afraid. Instead, I run toward it because the only way to escape fear is to trample it beneath your feet. When the Cocoa industry faces challenges you just don’t go into a state of despair but instead farmers , management and the board needs to wrap their heads around the issues and find practical solutions to overcome these challenges. You can’t give up, all of you have to work together, some of the farmers skills and great ideas but you need someone to drive you in the right direction, so you can make something out of it.”

Reviewing the GCA’s performance for the past year, Minister Bain Horsford praised a number of the efforts by the organization, but implored them to continue to explore adding value to Cocoa, for example the GCA’s Efforts at the Diamond Estate in Victoria , to produce, “ Jouvay” and other Chocolate products.

“While I applaud the GCA Efforts we must ask ourselves, will these measures bring the GCA and by extension farmers the long term benefits desired? This heavy reliance on prices on the international market will not restore a viable industry.”

The Minister referred to an article in the New Today Newspaper on Friday 16th August 2019, by Reginald Buckmire, titled: “Can chocolate save the Industry?

She agreed to specifics pointed out in the article saying,” The article points to value added and the potential exploits of the Diamond Chocolate Factory. I wish to concur with Dr.Buckmire. I would like to ask the GCA to continue to explore chocolate and chocolate products for this is the gateway to a viable industry. ”

The GCA however plays a critical role in Grenada’s cocoa economy, helping farmers to grow, ferment, dry, market, and sell the superior-quality beans. Chairman of the Organization Pastor Christopher Williams says that the organization continues to have high hopes for the Cocoa industry.

“We are thinking very seriously of increasing the price, not by Twenty Five ( 25) cents .We are operating in a climate where the world cocoa price was one thousand-nine hundred ( 1,900) US Dollars (United States Dollar =2.70 East Caribbean Dollar) a ton , we had offered farmers three thousand , three hundred a ton, so we had to look elsewhere.”

For the past year the GCA boasts of selling 350 tons of Cocoa to Valona, 50,000 tones to Rouse and Dominica 62,000 all at four thousand Dollars ($4000) per ton. Each year the Ministry of Agriculture awards thousands of dollars to farmers, through various programs including concessions, Farm Labor Support and wages paid to Cocoa Workers. The Ministry also provides agricultural extension service, promotes continuing education and best practices in cocoa farming.