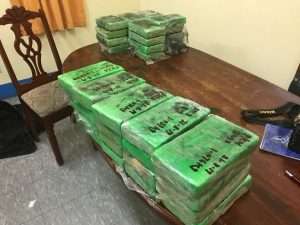 The men were nabbed with 40 kilos of cocaine during a joint police operation on Wednesday 21st August 2019, about 8:30 p.m. at Dr. Grooms, St. George.

Spann was granted bail in the sum of three hundred thousand dollars, with two sureties. He is to surrender all travel documents and report to the South St. George Police Station on Monday, Wednesday and Friday of each week between the hours of 06:00 a.m. and 6:00 p.m.

Reynolds, White and Chance have been remanded to Her Majesty’s Prisons.

All four men will reappear in Court on September 5th 2019.