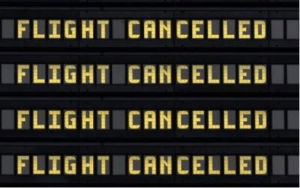 BRIDGETOWN, Barbados (CMC) — Two regional airlines have cancelled several flights as residents in the Lesser Antilles monitored the passage of Tropical Storm Dorian that is expected to strengthen to hurricane status later during the day.

“When you’re dead, you’re dead,” she said in a televised address late Sunday. “Stay inside and get some rest.”

The storm was expected to dump between 2 to 4 inches (5 to 10 centimetres) of rain in Barbados and nearby islands, with isolated amounts of 6 inches (15 centimetres).

As of 8:00 am EDT Monday, the fourth tropical storm of the Atlantic hurricane season was centred about 205 miles (330 kilometres) east-southeast of Barbados and moving west at 14 mph (23 kph).

Maximum sustained winds were at 60 mph (85 kph). Forecasters said it could brush past southwest Puerto Rico late Wednesday as a Category 1 hurricane and then strike the southeast corner of the Dominican Republic early Thursday.