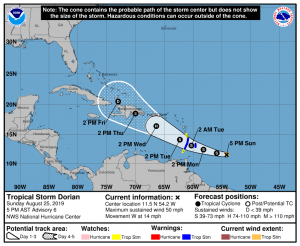 The National Disaster Management Agency (NaDMA) under the advice of the Meteorological Office at the Maurice Bishop International Airport, and following a meeting of the National Emergency Advisory Council today Sunday August 25, says Grenada and its dependencies are under a Tropical Storm Watch.

A Watch means the island is expected to start experiencing storm like conditions within the next 48 hrs.

At 5:00 p.m. the center of Tropical Storm Dorian was located near latitude 11.5 north, longitude 54.2 west (Grenada lies at 12.1 North latitude and 61.6 West longitude). Dorian is approximately 50 miles east of Grenada, and is moving toward the west near 14 mph, and this motion should continue through tonight.

A turn toward the west-northwest is expected on Monday, with this motion continuing through Tuesday night. On the forecast track, the center of Dorian is expected to be near the southern windward islands late Monday or early Tuesday and move into the Eastern Caribbean sea on Tuesday. Maximum sustained winds have increased to near 50 mph with higher gusts. Additional strengthening is expected during the next few days, and Dorian could be near hurricane strength by Tuesday over the Eastern Caribbean sea. Tropical-storm-force winds extend outward up to 35 miles from the center. The estimated minimum central pressure is 1003 mb.

Tropical Storm Dorian is expected to bring showers and thundershowers to the state of Grenada (mainly the northern parts) by Monday night into Tuesday. As such, the Met Office has issued a low chance of flooding for the northern part of the state by Tuesday morning.

The general public is reminded to review emergency preparedness requirements, especially family emergency plans and continue to listen to the weather advisories.

NaDMA in collaboration with the Meteorological Office will continue to monitor the system and update the public as necessary.