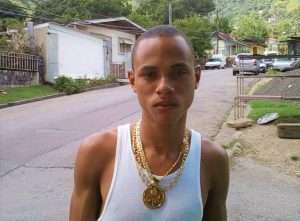 trinidadexpress.com-Gunmen showed no regard for the cries of four ­children to spare their father when they came after 30-year-old Akil Sutherland on Tuesday evening.

Sutherland, aka “Daddy Redz”, was gunned down near his home along Broome Street, La ­Puerta, Diego Martin.

At the time, his four children—aged eight, six, four and two—were at home.

Three men armed with firearms ran into Sutherland’s yard and confronted him.

Sutherland, seeing the gunmen, attempted to flee the scene and draw the gunmen away from his home and his children.

However, as he tried to jump over a concrete wall, his clothing got stuck on barbed wire, leaving him hanging helplessly.

The assailants jumped at the opportunity and gunned him down, within view of the children.

All the while, Sutherland’s four-year-old daughter was screaming for the gunmen to stop.

This was revealed by Sutherland’s relatives yesterday while speaking to reporters at Forensic Science Centre, St James.

Relatives, who spoke on condition of anonymity, described the three attackers as heartless, as they “mercilessly” gunned down a man in front of his children.

“You see the children right there, and could hear them screaming for their daddy. You are hearing the girl screaming ‘allyuh killing out my family!’ and y’all would still keep on pumping bullets into the man?

“Nah. Allyuh don’t care. Allyuh have no heart. What is that girl going to do now? That is something that she and all of them will have to bear for the rest of their lives,” relatives said.

‘He didn’t do anything recently to deserve this’

They recalled Sutherland had previously received threats, but they did not know over what.

They said the men in their family had always been targeted by gangs in the area, noting Sutherland was related to contractor Nicholas Selby, 26, who was killed on July 29, 2014, at La Puerta.

They felt as though Sutherland was targeted because “he was the last man” alive in the family.

“We are not saying he was an angel, eh, but we don’t know why this happened. As far as we are aware, he didn’t do anything recently to deserve this.

“He went to jail for about two years for possession of marijuana and thing. He had a past, but you see when he came out of jail, he changed his life. He decided to live differently and wanted to take care of his children, so he would do a hustle. He would be selling snacks and cigarettes and soft drinks and thing at the side, just so he could provide for his family the right way.

“He didn’t want to go back to jail at all and be away from those children. That was all he lived for, and he wanted to take care of all of them,” relatives said.

Facebook
Twitter
Pinterest
WhatsApp
Previous articleSpicemas Arrivals Show Strong Growth For Second Consecutive Year
Next articleJamaican Detained In US For 3 Months For Bringing In Honey That Was Mistaken For A Liquid Drug.