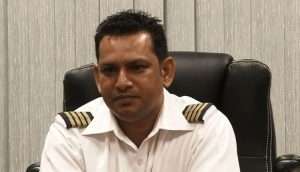 newsroom.gy – The Director of Domestic Airways, the airline which owned the aircraft which crash-landed and killed pilot Randy Liverpool on February 21, 2019, at Eterinbang, has been charged for breaching multiple safety regulations.

Four charges were brought against the Director – Orlando Charles – following an investigation by the Ministry of Social Protection’s Occupational Safety and Health (OS&H) Department.

Charles appeared in court on Wednesday without a lawyer.

It was claimed that at the time of the accident, the airline was not certified by the OS&H. According to the prosecution, between February 20, 2019 and March 20, 2019, the Airways failed to make an application to the Chief Officer of the OS&H. This is required 30 days on establishment.

Charles pleaded guilty to that charge and was fined $50,000- or three-weeks imprisonment.

Charles told the court that he is new to aviation management in Guyana but has been a pilot for 18 years.

The Director explained that the aviation industry is strictly regulated by the Guyana Civil Aviation Authority and he acquired the license to operate and was not aware of the agency and Occupational Health and Safety.

The Prosecution’s Attorney-at-Law, stationed at the Ministry of Social Protection, Kevin Morgan, explained that Domestic Airways was operating in Guyana since 2014 and is known to have been certified in January 2018.

He also disclosed that Guyana Civil Aviation Authority is currently conducting their own investigation in the matter.

Another charge Charles faced was that of failing to keep a register of accidents, as required by law. Charles pleaded not guilty to the charge.

It is also alleged that during the same period, Domestic Airways failed to provide the OS&H Officer, Dwain Vyhuis, with information in relation to the accident which led to the death of Liverpool.

He pleaded guilty with explanation to this charge and sentencing was deferred until August 22, 2019.

It was also alleged that Domestic Airways failed to give written notice of the accident arising out of the death of Liverpool.

Charles pleaded guilty to the charge and was fined $25,000 or default three weeks imprisonment.

Facebook
Twitter
Pinterest
WhatsApp
Previous articleDigicel: Leak Of The Government’s Bill Did Not Originate From Within Digicel
Next articleTrinidad: Woman Dies In Knife Fight While Man Goes To Hospital

More Than 50 Unaccounted For After Building Collapses In Florida