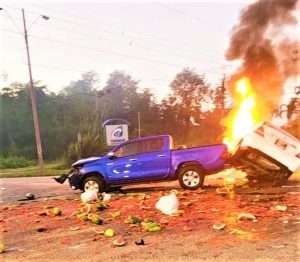 trinidadexpress.com- A suspected car thief died in a crash on Wednesday morning.

Police said the suspect, who has not yet been identified, was burnt to death when the vehicle hit a pick-up truck and exploded into flames at around 6a.m.

Police believe the white Nissan Tiida car was stolen and the owner stabbed in a robbery earlier.

The victim was taken to hospital.

Investigators were later informed that a vehicle matching the description of the stolen car had crashed into a blue Toyota Hilux.

The van was transporting watermelons.

Police said the car exploded on impact trapping the suspected thief inside.

The vehicle was completely burnt.

The driver of the van suffered minor injuries. He was taken to hospital.