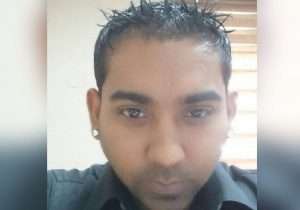 trinidadexpress.com – Law clerk Kristian Sirjusingh was shot in the head by bandits who came to rob, but left with nothing from a bar in Gasparillo on Monday night.

Police believe the 29-year-old father of one was killed out of ­anger and vengeance, as the owner had locked himself and his assets behind the barricaded bar counter.

When the killers came, Sirju­singh—who lived near Falcon Crest Bar (formerly Michelle’s Bar and Lounge)—was having a drink with his father, Ramesh, who was ­celebrating his 66th birthday.

Sirjusingh’s friend, 28-year-old Rishi Ramcharitar, was also at the table. The bar is located along Bonne Aventure Main Road.

They were seated at two tables outside the bar, when three men walked in and attempted to rob the owner around 8.15 p.m.

Ramesh Sirjusingh, a father of four, said after purchasing drinks for his son and his friend, he went over to another table and was talking to a waitress.