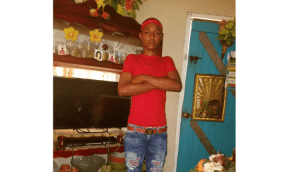 newsroom.gy- A West Bank Demerara teenager is in a critical condition at the Georgetown Public Hospital after he was chopped to the neck and other parts of his body during a fight at a football game on Thursday at the Stanleytown playfield.

Eighteen-year-old Seon Griffith of School Street, Stanleytown was rushed to West Demerara Regional hospital by public-spirited persons after the incident.

His sister, Tyra Quick told the News Room that her brother just wrote CSEC exams and while awaiting his results, he started to play football with other youths at the community playfield.

On Thursday Griffith left home about 16:00hrs and about two hours later, the family received the devastating news.

“Yesterday [Thursda] about 6:15pm, me and my mom were home and then we get a sudden rapping at the door from our neighbour, saying that my brother get chop to his neck and somebody already rush he to the hospital,” the sister said.

Griffith was subsequently transferred to the Georgetown Public Hospital for emergency surgery.

The sister said her brother identified two men from the community as the suspects.

“What really got me pissed off is that the big persons in the street were cranking the fight and when you ask them, nobody knows,” the sister said.

The family was told that the fight started when the teen innocently tackled one of the suspects during the game.

“You know like you playing football and I tackle you lil hard and you get vex, so it all started with football and I can’t see you would chop a man to he neck to kill he, over a football match,” the sister said.

Meanwhile, the teen’s mother Nadia Patterson said she is not satisfied with the Police investigation.

“The Police are moving very slow into this matter, and I need justice for my son, because is like people could do your children anything and walk on this road scotch free,” the mother said.

According to the mother, reports were made to the La Grange and Wales Police stations.

When contacted, the Police said efforts are being made to arrest one person in connection with the incident.