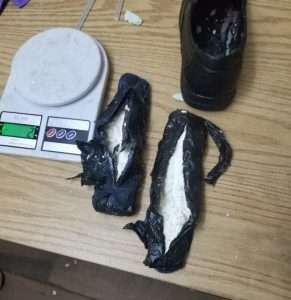 newsroom.gy– A 66-year-old man, who was allegedly nabbed at the Cheddi Jagan International Airport, Timehri with over 200 grams of cocaine stashed inside his shoes, was on Thursday remanded to prison.

It is alleged that Chase, on August 13, 2019, at CJIA, Timehri had 290 grams of cocaine in his possession for the purpose of trafficking.

According to reports, on the day in question, Chase was an outgoing passenger destined for Brooklyn, New York.

While he was going through the X-ray scanner, ranks attached to the Police Narcotics Branch observed objects in his shoes.

He was searched and two parcels of cocaine were allegedly found stashed inside.

The senior citizen was represented by attorney-at-law George Thomas, while the matter was prosecuted by Corporal Shawn Gonsalves. The Magistrate remanded him to prison until August 30, 2019.