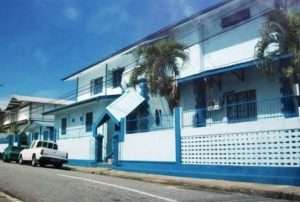 trinidadexpress.com- A 53-year-old sergeant with 31-years of service is expected to appear before a Port of Spain Magistrate today.

The officer, who was last attached to the Cunupia Police Station, allegedly threatened to kill his spouse.

The Express was told the dispute was over a message sent to a third party with whom the wife has a relationship with.

On Sunday, the sergeant threatened the woman.

Fearful for her life, and the fact that she believed her report may be ignored by officers in the Central Division, the 53-year-old woman went to the San Juan police station to make the report.

However, she was followed.

At about 9p.m. on Sunday, the sergeant showed up at the police station, and confronted the woman.

Officers of the San Juan police station intervened, and detained the sergeant.

The professional standards bureau, led by ACP Toteram Dookhie, were notified, and investigations into this incident were conducted by Inspector Marshall, Inspector Hills, Sgt Grey, and Cpl Moore.

Yesterday afternoon, a file was submitted to the Director of Public Prosecution Roger Gaspard SC, and advice was given for the sergeant to be prosecuted for the offence of engaging in a course of conduct that caused persons to fear that violence will be used against them in breach of the Offences Against the Person Act, CHP 11:08.

Under Section 30B. (1) a person found guilty on this offence, on summary conviction can face a fine up to $5,000 or imprisonment up to six months.

The section reads, “A person who is accused of conduct which would constitute an offence under section 30A and which causes the other person to fear that violence will be used against him, and the person whose course of conduct is in question knows or ought to know that his conduct will cause the other person so to fear, commits an offence and is liable on conviction on indictment to a fine of ten thousand dollars and to imprisonment for five years or, on summary conviction, to a fine of five thousand dollars and to imprisonment for six months.”