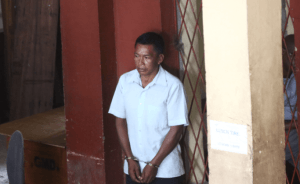 www.inewsguyana.com- A 50-year-old man was Tuesday morning charged for killing a man who was reportedly involved in an intimate relationship with his wife.

Munroe Lawrence, a farmer of Karaudanawa Village, South Rupununi, was not required to plead to the indictable charge when he appeared before Chief Magistrate Ann McLennan.

Police Prosecutor Gordon Mansfield presented the facts which stated that the accused found out his wife and Ernest was involved in an intimate relationship.

The court heard that Lawrence followed his wife to Ernest’s home and then hid in some bushes with an arrow and bow.

Lawrence, on seeing Ernest, fired an arrow from his bow which struck the victim in his chest, causing him to receive injuries.

The victim was then rushed to the hospital where he succumb to his injuries.

The matter was then reported, an investigation was carried out and Lawrence was arrested.

He was remanded to prison and the matter was transferred to the Lethem Magistrates’ where he will make his next appearance on August 26.