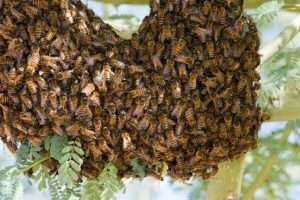 NASSAU, Bahamas (CMC) — An 82-year-old man has died after being stung by bees in the yard of his Freeport home last week.

Media reports said that Keith Finley died in hospital last Friday, two days after he was attacked at his home.

His wife, Pamela, told the Tribune newspaper that she “screamed in horror” as her husband sat helplessly at the front door “covered with black bees from head to toe”.

The Bahamas National Trust (BNT) said that this is the first fatal bee attack of a human on Grand Bahama and is warning residents to be “cautious” of their surroundings when outside. Two dogs in the area also recently died after bee attacks, before Finley was stung.

“We would like to reiterate the call for persons to use caution when moving around,” said BNT park manager, Elsworth Weir, adding that “Mr Finley was just doing some work in his yard, which is a relatively open area, and he went across the road and dumped some yard litter and was attacked”.

Weir said officials are still not sure whether the attack was by Africanised bees, but indicated that samples of the bees were collected, and they are awaiting DNA identification to confirm the species.

The Tribune newspaper reported that this is the second recorded aggressive bee attack on Grand Bahama this year.

It is believed that Africanised bees are responsible for the attacks. The first incident occurred on June 12 when a team from BNT was attacked while conducting a bird survey in East Grand Bahama. Team members were chased by the bees and received numerous stings, with one person stung up to 16 times,” it reported.