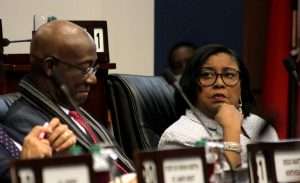 That was the question being asked by some yesterday as she remained in police custody up to press time.

Several officials have acknowledged that she and her partner, Michael Carew, were arrested and their home in Valley View, Maracas/St Joseph, was searched yesterday morning. Police later searched McDonald’s Port of Spain South Constituency Office on Picadilly Street, Port of Spain in the MP’s presence yesterday.

A government statement confirmed that a search warrant was executed at her home, and police said in a tweet she is assisting them with an investigation into corruption allegations.

Further than that, there have been no explanations as to exactly why police detained her.

Sources told Newsday police may have arrested and are questioning McDonald and her partner over the alleged misappropriation of funds in connection with the Calabar Foundation, which was incorporated in 2010.

While police have not made an official statement, sources said since 2016, they have been investigating what was done with a number of cheques given by the Ministry of Community Development and Culture to the foundation, of which Carew was a director. McDonald was Minister of Community Development and Culture in the last Patrick Manning administration.

The funds were variously reported to have been requested to refurbish the foundation’s headquarters on Ariapita Road, St Ann’s, or to build a community centre in Laventille. The purpose and activities of the foundation are unclear.

It is alleged that the funds were issued before the foundation even came into existence officially. Newsday understands the application to register the name Calabar Foundation was not made until two months after the cheques were issued, on July 14. The name was registered by the Registrar General’s office on August 24, and Michael Carew, Victor Mc Echrane and Lennox Carew were listed as directors.

The cheques given to the foundation in May 2010 were not deposited until September that year.

A year after the PNM got back into power in 2015, McDonald was removed as Housing Minister after questions arose over the allocation of an HDC house to her partner.

Questions were also raised about the Calabar funding at that time, prompting then acting Commissioner of Police Stephen Williams to order an investigation on March 18, 2016.

Newsday understands the investigation was led by Snr Supt Totaram Dookhie, then head of the Fraud Squad. Dookhie and a “special team” of officers continued the investigation and were part of the search of McDonald’s home.

That investigation was going on even as McDonald was appointed Public Utilities Minister, a post from which she was removed 48 hours later after red flags were raised about one of her guests at President’s House for her swearing-in – Sea Lots businessman, Cedric Burke.

According to reports, over a dozen people were questioned in relation to that investigation, which was in its final stages in March last year.

Yesterday, police went to McDonald’s house at about 6 am and searched it. McDonald and Carew were arrested at the same time.

Newsday understands because of problems with her blood sugar levels she was taken to hospital, then to the Maracas/St Joseph Police Station on Maracas Royal Rd, St Joseph.

Newsday tried to get several reactions, including one from Burke, who did not answer his phone.

Newsday also tried to ask government officials, including Cox, whether government had any intention of having McDonald step down as a minister, but up to press time there was no response.

Sources close to the Prime Minister said he was being kept abreast of the situation but was waiting to see the outcome of the investigation before acting further.

Up to press time there was no word on whether or not McDonald would be removed from her ministerial post.