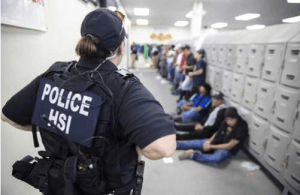 MIAMI, United States (AFP) — Raids by immigration authorities that swept up 680 migrants in the southern US state of Mississippi left their children to fend for themselves with the help of friends and neighbours.

The raids, which targeted seven food processing plants in six Mississippi cities on Wednesday, were believed to be the largest in a single state in US history.

The migrants were bused to detention centres for processing and possible deportation, but children in Forest, Mississippi discovered their parents gone only after coming home from school.

In tearful scenes captured by a local television station, children wept and begged on camera for their parents’ release.

“I need my dad and mommy,” 11-year-old Magdalena Gomez Gregorio told WJTV. “My dad didn’t do anything, he’s not a criminal.”

Neighbour Christina Peralta said the girl’s mother had been in the country for 15 years and had no record.

Peralta was taking care of two boys whose mother also was arrested.

“They’ve been crying all day since they got home from school,” she said.

Friends and neighbours took charge of the children and brought them to the Clear Creek Boot Camp, where they spent the night. Community groups donated food and bedding.

Videos and pictures showed children crying, covering their faces, consoling each other, and seated on the floor eating pizza from napkins.

Jordan Barnes, owner of the Clear Creek Boot Camp, said he hoped to “ease their pain a little bit” by giving the children a place to stay.

WJTV said all the children had returned home or to the homes of relatives by Thursday.

“These children went to day-care and are now returning home without their parents because Trump wants to play politics with their lives,” she said.

At a news conference on Wednesday, officials said the raids were months in the planning.

Mexico said 107 of its nationals were among the 680 detained.