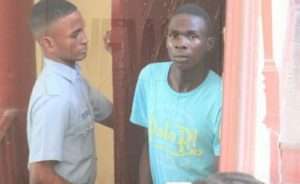 newsroom.gy- Eighteen-year-old Quacy Jupiter was sentenced to serve two and a half years imprisonment Tuesday by Magistrate Sherdel Isaacs-Marcus after he admitted to two counts of armed robbery.

During his first appearance at the Georgetown Magistrate’s Court Monday, he pleaded guilty to two armed robbery charges and not guilty to another count of armed robbery along with the illegal possession of a firearm and ammunition.

Jupiter had told the Magistrate that he was hungry and needed money hence he committed the crimes.

The court heard that on August 1, 2019, at Louisa Row, Georgetown, while being in the company of another and armed with a gun, he robbed Ulric Bristol of a bicycle, cell phone and other items amounting to $63,000.

The other charge stated that on the same day and location, under the same circumstances, he robbed Robert Rollins of a bicycle, silver ring and cell phone amounting to $43,000.

The Magistrate sentenced him to two and a half years imprisonment on each count but ordered that the sentence run concurrently.

Meanwhile, the third charge stated that on the same day and at the same location, the young man robbed Roxanne Daniels of two cell phones along with cash amounting to $131,000.

It is further alleged that on the same day at Campbell Street, Albouystown, Georgetown, Jupiter had a .32 revolver along with four matching rounds in his possession when he was not a licensed firearm holder.

He pleaded not guilty to the latter charges and was remanded to prison until September 23, 2019.

Police Prosecutor Shellon Daniels told the Court that the victims identified the accused and Police found the gun, ammo and stolen items at his house.