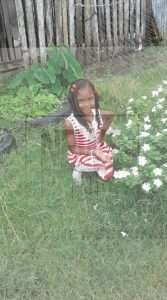 newsroom.gy- In what residents described as a traumatic and dramatic scene, seven-year-old Shanya Persaud walked out of her family’s burning house engulfed in flames and ran to the end of the street screaming for her mother.

With arms outstretched, the child walked into a relative’s yard and said: “papa look how meh get bun up.”

Shanya was sleeping in her North Mon Repos, East Coast Demerara house when it caught fire at around 1am Sunday; her older brothers – ages 13 and 9 – ran out of the house and left her inside while her mother was at a wedding house in the same community.

The child’s father, a fisherman was at sea for the last four months and returned late Monday night after he heard of the incident.

When the News Room visited the area Tuesday, residents and relatives described Shanya as a brave child; they believe that she would have burnt to death if she hadn’t walked through the fire.

A relative, Vimla Biswah and her husband rushed the little girl to the hospital.

Biswah said that Shanya remained conscious throughout the ride to the Georgetown Public Hospital as she kept asking “how long more we get to reach the doctor?”

“She is very brave, very brave for a baby and a child; adult like us would panic and burn in that house…but that child fight for her life, if she [didn’t] come out the house, she woulda burn,” the relative said.

According to Biswah, they kept the little girl talking on the way to the hospital; it was then Shanya told them that she woke up and felt her feet burning and jumped off her bed.

Biswah said the child told them that she could not see where she was going, but she remembered where the door was and walked out of the house covered in flames.

Biswah’s daughter, Morrina said they were asleep when they were awoken by a phone call alerting them about the fire.

“When we open the door we see the house on fire, my mother and father run over to start looking for the children, they find both brothers but we wasn’t finding the child,” Morrina said.

Relatives said they started screaming the little girl’s name but they did not know she had already exited and was walking in the street.

Morrina said when they thought that all was lost, Shanya answered and came to them with her skin almost burnt off and her feet bleeding with cuts.

“My mother pick up her and run with her and my father start the vehicle to take her out,” Morrina explained.

By this time the children’s mother arrived home, and according to relatives she was intoxicated.

“When they were leaving, by the time they reach the bridge there is the mother coming, but she was intoxicated and they drove away with the child,” Morrina said.

Shanya received second and third-degree burns on 97.8% of her body and is currently in a critical condition at the hospital. She had to undergo emergency surgery on Monday.

“She is not seeing, her eyes and everything is burnt,” a relative said.

However, Shanya can still hear and is fighting for her life as she tries to respond with her fingers when someone speaks to her.

Meanwhile, the child’s aunt Shanta Persaud said the mother has since restricted relatives from visiting the child in the hospital.

“My father reach her this morning and ask her why she didn’t allow the [relatives] to go in, she said because when she came everybody was abusing and assaulting her,” the aunt said.

The aunt claims that they did not abuse or mistreat the mother in any way, but rather tried to help.

“We didn’t know how the fire started, I living couple house from her and my neighbour see the house on flame and she call out on me,” the aunt explained.

The aunt said she alerted other relatives and quickly ran to the house.

“I start scream out for my niece and nephews…the mother was sporting at a wedding house and when she [the mother] come she ask where is the dog and chicken them, that’s all, if it wasn’t for my family my niece would be dead,” the aunt said.

Residents explained that there was a power outage in the community Sunday night and they assume that the children may have lit a lamp which could have caused the fire.

The 7-year-old is described as a very smart and generous child; residents said whenever there is cricket in the street playing she is always present and was also actively involved in extracurricular activities at her school.