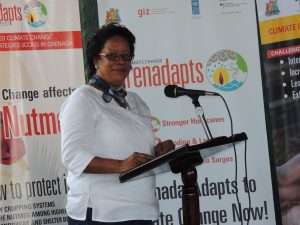 With the onset of the 2019 rainy season, the Ministry of Agriculture and Lands has officially opened the Plant Distribution season. This season, which runs from July – December 2019, would focus on distribution of crops inclusive of soursop, nutmeg and cocoa.

During the period the Ministry aims to distribute forty thousand and two (40,002) plants, throughout distribution centers island wide.

The Ministry held a special two-hour ceremony at the Mirabeau Plant Distribution Center to commemorate the opening of the season, with Minister of Agriculture and Lands, Hon. Yolande Bain Horsford declaring the season open. Addressing the opening ceremony, Minister Bain Horsford underscored the ministry’s efforts to deliver high quality planting material to the nation during the season.

“The Commencement of the plant distribution season is very significant as it provides the Ministry with an opportunity to showcase the hard work   of the workers of the different distribution stations. The efforts of these workers are evident in the high quality planting materials made available to the Nation’s hardworking farmers. It has always been my strong believe that access to high quality planting materials is fundamental in achieving success in crop farming.”

Plants sold during the exercise are produced at the four different propagation stations located at Mirabeau and Boulogne in St. Andrew, Ashenden in St. David and Maran, St. John. The Ministry through the plant distribution exercise encourages farmers to reestablish fields and increase production of crops.

Chief agronomist within the Ministry of Agriculture and Lands Ms. Shira Baldeo   said that the Ministry has decided to increase the number of plants that will be made available to the public despite prolonged periods of drought that has been experienced.

“In 2018 we had thirty-nine thousand seven hundred and nineteen (39,719) plants available at the beginning of the distribution season, we produced eighty nine thousand, one hundred and forty five plants (89,145) for that  whole year.” Despite the erratic weather patterns and prolonged dry season, we now have forty thousand and two (40,002) plants available for the opening of the distribution season, two hundred and eighty-three (283) more plants, than what we had in 2018.”

Baldeo also made mention to the numbers of each crop that is available:

With Soursop one of the crops being pushed, she added “In the case of Soursop, in the first instance 5,000 would be made available in early august, another 5,000 early September and   another 5000 seeds will be made available for later demand.”