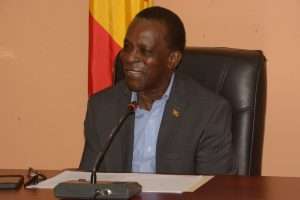 Prime Minister and Minister of Finance, Dr. the Right Honourable Keith Mitchell says the Grenada economy remains strong in 2019, with another year of growth being projected.

In 2018, the Grenada economy was recognised by the Caribbean Development Bank, as the fastest growing economy in the region.

Speaking during Tuesday’s Post Cabinet Press Briefing, Dr. Mitchell said, “The tourism and transport sectors appear to be the main drivers of growth, along with continued recovery in the agriculture sector. The construction sector, although, not as robust as last year, also continues to be a major source of economic activity and employment in 2019.”

When questioned about efforts to further reduce unemployment, Dr. Mitchell said that will be influenced by the level of private sector projects and the training and empowerment of young people. “There are a number of skills training initiatives underway and what we expect is that those benefitting from this training, will then be able to pursue self- employment by starting business ventures.”

Government’s revenue collection is also up in 2019, according to the Prime Minister. “Total revenue for the first half of 2019 amounted to $389.9 million, which is 3.45 more than what was collected in the first half of 2018. The main drivers are income and property taxes and VAT.”

The Prime Minister noted that the number of projects currently underway and those set to come on stream represent a clear indication of private sector confidence in the local economy.

“In addition to projects already underway, there are several hotel development projects set to get underway soon including the Range Developments luxury resort in St. David’s; a 240-room luxury resort in True Blue and a major development in St. Patrick’s. What is important to note is the geographic spread of these investments which will bring employment opportunities to different parts of the island,” Dr. Mitchell said.