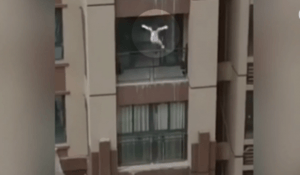 NEW YORK POST — This is the moment a 3-year-old boy in China plunged from the sixth floor of an apartment building — and was miraculously saved by a group below who used a blanket to break his fall.

Video captured the child dangling off a balcony in the city of Chongqing in southwestern China on Monday, desperately struggling to climb back up before he couldn’t hold on anymore and fell.

Moments before the boy fell, a pack of bystanders on the ground rushed to the spot below him with an outstretched white blanket.

The footage showed the neighbors safely catching the boy with the blanket after he tumbled six stories.

“I looked up and saw a little child was dangling up there,” Zhu Yanhuni, one of the people who helped save the boy, reportedly told state broadcaster China Central Television.

“My first reaction was to find something to catch him. I thought about rushing over there and catch him with my bare hands, but that would not have worked.”

Zhu said he “held out the blanket along with others, all the while keeping my eyes on the child.”

“I looked at the blanket wondering whether we could catch him safely. My only thought was to keep him safe,” he said.

Zhou Xiaobo said he was also among those to save the boy “and helped hold out the blanket.”

“Ten seconds later, the boy fell. It all happened so fast,” Xiaobo said.

The boy was hospitalized after the incident but did not suffer any injuries.