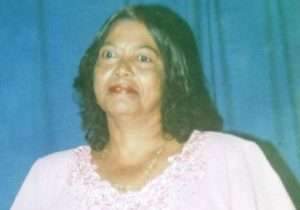 trinidadexpress.com- WITH their savings stolen by thieves who shot and killed Moruga grandmother Merle Singh-Subero, her family said they do not have money for her funeral expenses.

Singh-Subero’s son, Anthony Singh, said the family had been struggling to survive before the robbery, and with the stolen savings gone they were left with nothing.

“Who is going to help our family now? We do not even have the money to pay for a funeral,” said Anthony Singh.

On her 65th birthday on Friday, Singh-Subero was shot and killed by gun and cutlass-toting thieves who opened fire as they tried to break down the door of the family’s home at Cachipe Village.

Singh-Subero was trying to barricade the plyboard door with her two grandsons when she was shot.

An autopsy performed at the Forensic Science Centre in St James yesterday revealed she died of a gunshot wound to the neck. She was the mother of two and a grandmother of four.

As she took her last breath, the three thieves beat her two grandsons, Ryan Singh, 30, and Michael Singh, 24.

Michael Singh suffers from scoliosis and he was beaten with a firearm and a cutlass.

Also in the one-bedroom house was Singh-Subero’s daughter, Michelle, who is mentally and physically challenged, and mute.

The criminals ransacked the house that they had been building for four years and took the family’s savings of approximately $5,000.

Ryan Singh said the family has been struggling to cope since his grandmother’s death.

“We cannot sleep in the house, we can barely eat. My mother does not know what happened, she does not know her mother is dead. My brother had a slight idea that she died,” said Ryan Singh.

Anthony Singh said he believes the thieves came for the public assistance welfare that the family received to take care of his sister, Michelle, and his nephew Michael.

He said he did not have faith that the police would find the criminals that took his mother’s life and the family savings.

“They could find a telephone in Laventille but they can’t find the men who killed my mother, and who beat up my nephews innocently. How much money they thought a woman of 65 years will have? They know that she got public assistance welfare money for my sister and her son. My sister cannot walk nor talk. My nephew has scoliosis and that is the one they beat up on his face and head,” said Anthony Singh.

He said his mother was the caregiver for his sister, Michelle, and his nephew, and there was no one in the family to give them proper care.

“Since they killed my mother, they have been staying with my grandmother, who is 93 years old. I have to try to find a home to put them in to take care of them. We don’t have a choice, but we do not have the money. Who is going to help our family now?” he said.

The Express reached out to Member of Parliament for Moruga/Tableland Lovell Francis via text and calls to his cellphone but there was no reply.