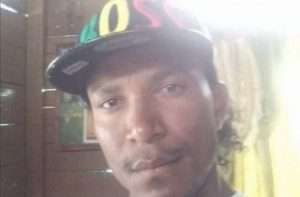 guyanachronicle.com- A father of six who tried to part a fight at Seeta’s Bar, Station Street Kitty, Georgetown, was shot dead in the washroom by a known suspect, in the wee hours of Monday morning.
Dead is Kurt Anthony Duncan, 32, of Sophia, Greater Georgetown.

Police later issued a wanted bulletin for 32-year-old Keon David of Sophia in relation to the murder. He is said to be a former policeman.

Reports indicate that the bar was in the process of closing after 2:00hrs when a scuffle ensued with a female and a male who was washing the floor of the premises.

Duncan allegedly intervened and reportedly assaulted the male cleaner and during that process, the suspect who was seated nearby allegedly whipped out a firearm and shot him in the region of his chest.

He was taken to Georgetown Public Hospital Corporation and was pronounced dead on arrival.

The body is at the Georgetown Public Hospital Mortuary awaiting a post mortem examination.

Relatives of Duncan described him as a hardworking man whose absence will leave a tremendous void in his family’s life.

“He was a very hardworking person who loved his family; we want justice for what happened, this is not easy for us,” one relative said.