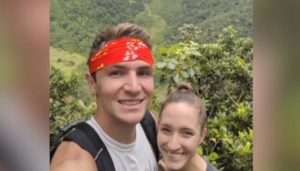 A US couple’s honeymoon nearly ended in tragedy after one of the newlyweds fell into a volcano.

Clay and Acaimie Chastain were hiking on a dormant volcano on the island of St Kitts when Clay decided to follow ropes leading into the crater, CBS News reports.

They broke while Clay was climbing down, sending him tumbling more than 15 metres and forcing Acaimie to scramble down after him.

“As I was climbing down I kept screaming and calling for him, and then I started actually hearing him calling back every so often just saying help but kind of faint and weak,” she told CBS News.

She found her husband confused and bleeding in the crater. The pair had no cell phone reception so she guided him out of the crater and they hiked 6km to safety, with Acaimie leading the way.

“It was really scary and the hardest day of my life so far,” she said. “It’s still really traumatic for me to think back about it.”

The pair’s fight wasn’t over. Clay needed a US$30,000 medical flight back home to Indiana and insurance wouldn’t pay for it.

Friends and family were able to fundraise the full amount of the flight, and the pair will make their way back to the United States on Wednesday.

“Clay and I are just blown away by everyone’s generosity and prayers while we’re in this situation,” Acaimie told CBS News. “Truly unbelievable.”