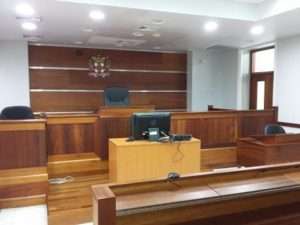 (JAMAICA GLEANER) — A St Catherine man who was convicted of incest for having sex with his then teenage half-sister has been sentenced to five years in prison at hard labour.

The sentence was handed down by Justice Crescencia Brown Beckford in the St Catherine Circuit Court yesterday.

She also ordered that the 32-year-old man’s name be placed in the sexual offenders’ registry.

His name is being withheld to protect the identity of the victim.

He was found guilty by a seven-member jury last month after a seven-day trial in the St Catherine Circuit Court.

He was arrested and charged after his half-sister, who was 18 years old at the time, complained that he had sexual intercourse with her after she went to his Spanish Town home to spend the night so she could attend a marathon CXC preparation class the next day.

Prosecutors led evidence that on the night of March 3, 2013 the teen fell asleep in her half-brother’s room and was awoken after she felt “something on her back”.

According to the evidence, that’s when she saw her older sibling on her back having sex with her.

She indicated that she pushed him off before asking what he was doing.

She said he told her to lay down and that he loved her before she fled the house and called her teacher who accompanied her to make a report to the police.

The report of the doctor who examined her that night was part of the evidence in the trial.

It indicated that the then teen had injuries that were consistent with penetration by a blunt object.