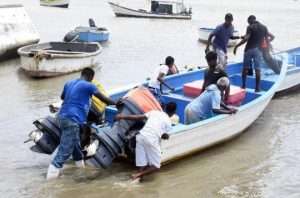 trinidadexpress.com- The body of one of the seven fishermen thrown overboard in the Gulf of Paria on Monday night has been found.

It was discovered at daybreak on the coastline in Brickfield, a fishing village south of Carli Bay.

The identity of the body was not disclosed.

Relatives of the missing have gone to the scene.

Shrotly before midnight on Monday, pirates attacked at least six fishing vessels in the Gulf of Paria off the ports of Carli Bay and Orange Valley.

The armed pirates held up the fishermen with guns and robbed them of their boats and engines before throwing them overboard.

The pirates are said to be locals.

Several were able to swim ashore.

Seven could not be found.

The three who made it ashore have been identified as Brian Seemungal, Robbie Jaggernath and Dillon Mendoza.

Two of the fishing boats were found drifting at sea yesterday.