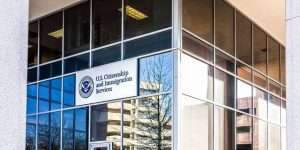 foxnews.com- A Grenadian man residing in New York City  was arrested Tuesday for allegedly running an immigration fraud scheme that involved filing over 1,800 fake immigration applications over the past four years, according to a press release from the Department of Justice’s office in Vermont.

Louison’s arrest comes less than a week after a federal grand jury returned a 12-count indictment, charging him with presenting false adjustment of status petitions to the United States Citizenship and Immigration Services Service Center in St. Albans, Vt.

The Office of the United States Attorney for the District of Vermont, which conducted the probe, said Louison made false statements in connection with Form I-360 petitions for status adjustments under the Violence Against Women Act (VAWA), a law that enables immigrants to become lawful permanent residents (LPRs) of the U.S. if they were abused by a relative who is a U.S. citizen or LPR.

Louison allegedly submitted false information in the VAWA petitions so petitioners could secure work authorization permits. Last week’s indictment charged that the petitioners – who paid Louison for his services – were not abused as described in the petitions and never discussed abuse with Louison.

The U.S. Attorney’s Office in Vermont said that Louison filed false statements with the United States Citizenship and Immigration Services, including more than 1,800 fraudulent applications for over 1,000 petitioners in the last four years.

Louison was scheduled to appear in the United States District Court for the Eastern District of New York later on Tuesday, according to the press release.

His arraignment in the District of Vermont has not yet been scheduled.