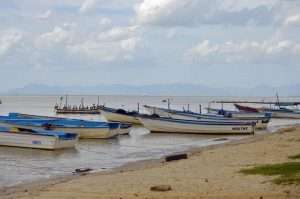 trinidadexpress.com- In a midnight pirate attack, five fishing vessels were stolen from the Gulf of Paria in the vicinity of Carli Bay and Orange Valley.

Several fishermen who were onboard these vessels were thrown overboard.

At least seven are still missing.

Three have made it ashore alive and are being questioned by the police.

They have been identified as “Bop”, “Dugie” and “Lizard”.

According to Jassodra Lallack, the mother of missing fisherman Hemraj Sooknanan, 19, he went out to sea on Monday evening.

She said late last night, she was told that there were bandits out at sea robbing boats of thee engines.

She said Lizard told her the missing men were thrown overboard.

Earlier this morning the Trinidad and Tobago Coast Guard responded and deployed a single vessel to search for the missing men.

According to the Friends and Fishermen of the Sea activist group, after making a journey to Carli Bay, the TTCG vessel returned to the Chaguaramas Base because according to the Coast Guard, “It did not have the capacity”.

Fishermen in the Gulf of Paria have banded together and are searching the waters at this time.

Citizens are asked to be on the lookout for suspicious activity on the coastlines and on the beaches.

Seafarers are asked to be on the lookout for the missing seamen and for any suspicious activity.

The stolen vessels are:

So far, five engines have been recovered and a suspect is in custody.