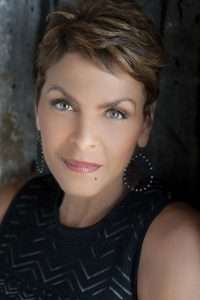 The charge falls under Jamaica’s four-year-old Cybercrimes Act, which was enacted to address computer-related crimes.

His conviction comes more than two years after Darieth Chisolm, a former NBC News anchor based in Pittsburgh, Pennsylvania, complained to Jamaican authorities that Powell created a website where he posted nude pictures of her along with derogatory comments.

Chisolm, in videos posted on YouTube, said the pictures were taken while she slept during the time she lived in Jamaica with Powell.

She also said, she was being forced to return to the relationship.

In one video, Chisolm charged that Powell threatened to kill her – either by shooting her or stabbing her in the heart – before warning, in several emails, that he would post the explicit pictures to destroy her career.

She recounted the moment her ex-husband alerted her to the pictures.

“I couldn’t think, I couldn’t breathe…I was so humiliated, so ashamed, so embarrassed. I felt like my world was coming to an end”, Chisolm said.

“This began for me, months of pain, and depression, and anger, and confusion and silence”, said Chisolm, who has now become a cyber harassment activist.