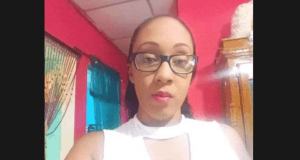 TRINIDAD EXPRESS — A 26-year-old Mayaro man who was the ex-lover of WASA security guard Chris Rivers, has been charged with her murder and is expected to appear in court on Monday.

The suspect, of Oilfield Road, Union Village, was charged with murder by PC Gillead of Homicide Region II.

The instruction to charge was given by the office of the Director of Public Prosecutions on Friday.

While homicide detectives were seeking legal instructions at the office DPP, Rivers’ family held her funeral at her home at El Guanapo Estate, Rio Claro.

The funeral was attended by hundreds of mourners from her community who came to bid their final farewell.

She was described as a person who was “beautiful on the inside and outside”, and well-loved by all who knew her.

Rivers’ picture was posted on the wall of the porch of the family’s home where the closed casket was placed for her funeral service.

Rivers’ mother, Roslyn Rivers, was inconsolable during the service, as she sat next to the casket surrounded by relatives.

Roslyn Rivers had told Express that her daughter had ended a relationship with a man who had been physically abusive to her during a four-year relationship.

The mother said her daughter returned home in October after the man beat and kicked her.

She said Rivers had a miscarriage two months later.

Rivers decomposed body was found on July 15 — one week after she went missing after leaving her workplace at a WASA sub-station in New Grant.

Days later police detained the suspect and his girlfriend.

Police were allegedly led to the body by a woman who allegedly told them that Rivers was strangled and her body dumped in a forested area near the Mafeking Cremation Site.

The investigation was supervised by ASP Sean Dhilpaul, and assisted by Sgt Toussaint of Princes Town CID and Cpl Bennett.