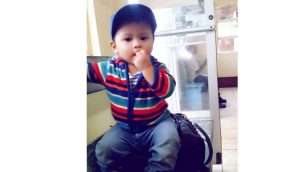 GUYANA NEWS ROOM- A two-year-old baby of the North-West District died hours after he was stung by a scorpion last Wednesday; his family believes his life could have been saved had health authorities acted swiftly.

The incident occurred at the family’s Kobarimo Hill, Mabaruma home.

During an interview with the News Room on Friday, the family claimed that it was the negligence of the Mabaruma Hospital that resulted in the death of the baby.

His grandmother, Nadira Lackna, said that on the morning of July 17, the child’s mother was about to pull up his pants when he cried out to her that he was stung. When the mother took off the pants, she noticed the scorpion.

The grandmother said they killed the scorpion and used some of its remains to rub on the wound, but her grandson only got worse and the family rushed him to the Mabaruma Hospital.

Upon arrival at the hospital, the family was told that they had no treatment for the sting and that the baby would have to be flown out to the Georgetown Public Hospital.

The grandmother said they were told that a plane would arrive at midday to take him to the Georgetown Public Hospital.

But three hours after lunch, the plane had not arrived and when the grandmother inquired, hospital staff told them they know what they are doing.

The grandmother told the News Room that the plane never arrived until after 15:00hrs.

She said they took about one hour from Mabaruma to the Eugene Correia International Airport, where they had to again wait for an ambulance to arrive.

After about 40 minutes of their eventual arrival at the Georgetown Public Hospital, the family was told the heartbreaking news.

The grieving family is disappointed in the health sector and the way in which the baby’s case was handled.

A post-mortem examination conducted on Friday showed that the child died from respiratory failure as a result of the scorpion’s sting.

Regional Chairman Brentnol Ashley told the News Room that there are conflicting reports of what took place and the Regional Administration has asked health authorities for a report.

Ashley said he believed that the hospital should have had medication to treat scorpion and snake bites as medication was provided to the hospital after a previous incident in which a child died from the sting of a scorpion.