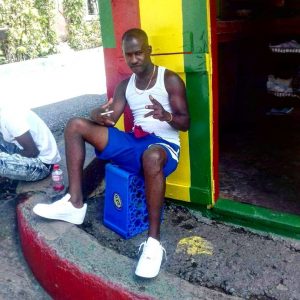 newsday.co.tt- HOURS after he was gunned down at his St Barb’s businessplace on Wednesday night, reputed gang member Dexter Joseph’s wife and his girlfriend were both taken to Port of Spain General Hospital after they went into labour at the same time.

Joseph, along with his friend Joel Moore, aka “Tallman,” and three others were liming at the parlour at around 8.45 pm when a silver Nissan Wingroad drove up to the crowd, and four men got out of the car and shot at them, before getting back into the car and driving off.

Joseph and Moore were taken to the Port of Spain General Hospital ,where they died while being treated.

Newsday visited the Forensic Science Centre, St James, yesterday and spoke to Joseph’s relatives, who said they were shocked and saddened by his death. They said he was a caring man who sought to maintain peace and order in his community.

A relative said, “He has two on the way. The both of them are at the hospital right now, two different women with his children. He was one of the coolest, humblest, realest men you’ll find. He was a URP foreman, he had a little construction company as well.

“Today was supposed to be a happy day for him but look what come and happen now. He was the peacekeeper in the area…Look how long you haven’t heard about anything in St Barb’s.”

Asked to respond to reports that Joseph, also called “Pullskin,” was a gang member, while his relatives admitted he was a member of the Rasta City gang, they said that was only to defend his community and himself from attacks from Muslim gang members.

“Yes, he was a Rasta City member, but at the end of the day they (Muslims) force people to do that (join the Rasta City gang), because these Muslims were killing their own. The police know exactly what is going on.”

Relatives said they believe the only way to end crime in Laventille is to remove the gang leaders in the community and felt the police were not taking the killings seriously.

Newsday spoke to Moore’s mother Melanie Daniel, who said she did not know her son to be involved in any illegal activities, but admitted that he was wayward in his youth and she fought hard to keep him grounded and away from criminals.

“I am a hairstylist so he worked with me selling haircare products for a while, he tried taxi-driving, and then was working on a sewage truck. He did different jobs .

“But I never knew him to be involved in anything illegal, and that’s just the truth as I know it.”

She said her son lived in St James and was not sure what he was doing in St Barb’s.

Daniel said she intended to care for her two grandchildren and give them the guidance they needed.