Guyana: Man Sentenced To 30 years In Prison For Stabbing Wife To Death 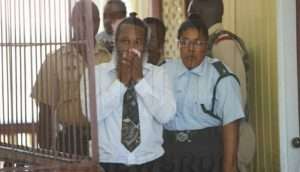 Singh,46, was originally indicted for the capital offence of murder but opted to plead guilty to the lesser offence of manslaughter.

The probation report which was read in court Thursday stated that Singh expressed remorse and is haunted by the memories of his reputed wife.

The victim’s mother, however, noted that Singh was abusive and jealous.

The mother told the court that Singh had made several threats to her daughter’s life and she had begged them to part ways.

The mother pleaded with the court for justice to be served.

In addressing the court Singh said, “It has an old saying that when you think about things, you dream them,” as he explained that he would be in prison dreaming about his reputed wife wishing that he could talk to her.

“The number of injuries you inflicted to your partner made me cringe,” the Judge said.

Singh and Sugrim were involved in a common-law relationship for over five years, but it was abusive.