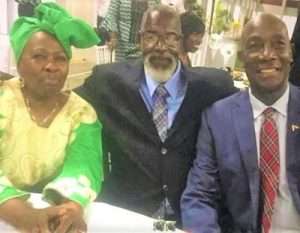 trinidadexpress.com- This is a breakthrough in the double murder of John Mills and his wife Evlyn John.

Mills’s death certificate was used at a financial institution in Trinidad, with attempts to withdraw his savings.

Both were found bound and gagged at their Cocorico Avenue, Buccoo New Road, home, on May 2. Autopsy results revealed both had been strangled, but Mills was also stabbed about the body.

Over the last two weeks, the Tobago Homicide , Fraud Squad back up by other units within the TTPS were involved in an operation both in Trinidad and Tobago .

Seven people were arrested and charged by Fraud Squad as a result of a massive organised effort, to defraud the Unit Trust Corporation.

Two are former Unit Trust employees who were held in Crown Point heading to the ANR Robinson International Airport, with international tickets to Amsterdam.

Two have appeared in court in Trinidad.

They are a Tobago male and a Trinidad female were arrested and charged for conspiracy to defraud the Unit Trust Corporation (UTC) when they presented the death certificate of Tobago murder victim John Mills, to collect his savings in Port of Spain.

The five others, including a neighbour of Mills will appear before a Scarborough Magistrate Court, charged with conspiracy to defraud the financial institutions.

No one has been charged with the murder of the couple.