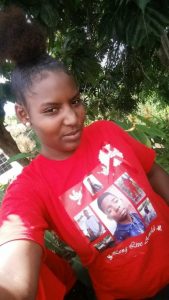 stlucianewsonline.com- Police have charged a 16-year-old female in connection with the death of a man in Gros Islet.

According to law enforcement sources, 16-year-old Nadeije Mitchell of Gros Islet was charged for causing the death of 26-year-old Marjele Williams, also known as Marley and Moon Head, of Gros Islet, under section 85b of the Criminal Code of St. Lucia 2013.

She was charged by the Criminal Investigation Department of the Gros Islet Police Station on Sunday, July 14, sources said.

She is expected to appear in court on Wednesday, July 17.

Mitchell is accused of fatally stabbing Williams on Thursday, July 11, 2019, around 9 a.m.

A post-mortem examination conducted later the same day revealed that Williams died from a stab wound to the heart.

It is alleged that William and the 16-year-old female had a prior altercation before he was attacked and stabbed in the chest area. The incident occurred on Marina Street in Gros Islet.

“The suspect walked up to him and stabbed him with a knife which the suspect twisted,” a law enforcement source had told St. Lucia News Online.

“Apparently the suspect and the guy had issues before,” the source added.